Last month saw the release of my Nerida shawl in issue 2 of Crochet Now Magazine. I have been overwhelmed at the wonderful response to Nerida and truly appreciate every comment and shared photo of your finished shawl. Please keep sending your pictures I love seeing them and would love to make a collage of them.
This is the first piece I have designed that is inspired by its name. I heard the name few good months back and fell in love with it, I just adored the sound of it.
Name Nerida is taken from the Greek word – Nereids, which in Greek mythology were sea nymphs.
Nereids also known as the female spirits of sea waters, were the 50 daughters of Nereus (the old man of the sea) and Doris. The Nereides dwelt with their elderly father at the bottom of the Aegean Sea. They would also accompany Poseidon, the god of the sea.
The Nereid Thetis was their unofficial leader and Amphitrite was Poseidon’s queen. 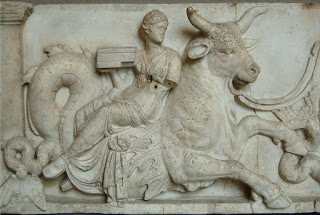 Only Theits was ever described in any form and it is assumed that her sisters were similar in appearance – she was a beautiful young women. Nereids were protectors of sailors and fisherman, coming to the aid of those in distress. The melodious voices sang as they danced.  They symbolized everything that is beautiful and kind about sea. 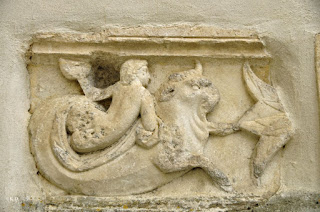 The oldest mention of the Nereids comes from Plato. When Plato was describing the Temple of Poseidon on the island of Atlantis, he said that there was a golden statue of Poseidon with one hundred sculptured Nereids riding dolphins around the base of it. The number of Nereids given by Plato seems a rather off, as in the writing of Homer and Hesiod they both  stated that the Nereids were fifty in number, it must be assumed that Plato was well versed in the writings of Homer and Hesiod.
When designing Nerida I wanted to depict the sea, where Nereids dwelt, in all its forms. When choosing the shape there was no doubt in my mind that it had to be half circle as the soft curve depicts the gentleness of weaves. The shawl has sections of plain pattern and lace, the plain part represents the sea when calm and the lace symbolises the turbulent sea when the storm rages with the water beating on rocks shown by the sharp edging.
Then I came to the question of colour……
Sea isn’t just blue, it has many shade, depending on its state, depth, the weather, time of the day. I didn’t want the colour to be flat, but I also didn’t want to show the different shades by crocheting stripes. After looking at gradient, flecked, and all other sorts of yarns I have settled for Rowan Fine Art in Stoat sh. 03.

The colour is just perfect is this gentle kind of middle blue with lighter shades running through it, and of course it didn’t hurt that it’s one of my favourite yarns. That’s the yarn I have chosen for my imagined vision of Nerida, but you can choose any 3-ply yarn and name the shawl by your favourite name 🙂.
Crochet Now are running a special offer on subscription now, which is a great deal and to top it, Rowan Fine Art is on sale now as wel!! 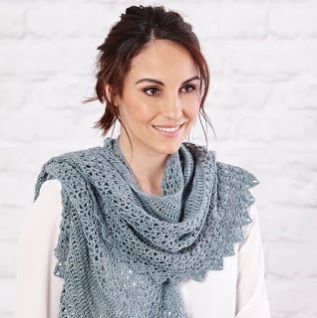