Well winter is finally here! It hit me with a sharp freezing wind, I mean I knew
it’s coming, but with November being so mild I actually thought we might get away
with it. Still, there are lots of things to love about winter: wearing woollen
jumpers , scarfs, gloves, it’s far too cold to go out and socialise so you stay at home
and actually have the time to finish all your projects, it helps that  TV  is relatively good.
And of course Christmas!
I really do love Christmas, actually I love the run up to Christmas more, the fantastic atmosphere when it gets dark so early, but all the decorations are up everywhere and everything sparkles, the fantastic markets and even the carols being played on continuous loop, but the thing I love the most about Christmas is MULLED WINE!!
Everyone says that Christmas is far too commercial, of course it is, but it is us who made it that way. On the other hand, how often do you really treat yourself? How often have you promised yourself the earrings, handbag or bracelet, but there were always far more important things to spend money on, is treating yourself or loved ones once a year such a bad thing? Some retailers start Christmas advertising in August, but for some this is make or break period, it will decide whether they can survive and continue to trade next year or not, so not surprisingly they start as early as they possibly can.
Anyway, Christmas wouldn’t be Christmas without beautiful, sparkling Christmas tree! My one is not up yet, but I have been busy making decorations for it. One of the decorations is the crocheted little Robin. He’s a cute little fella with slightly wonky wings, I first designed him for my Little Festive Workshops and I’m pleased to report he has been a massive success. 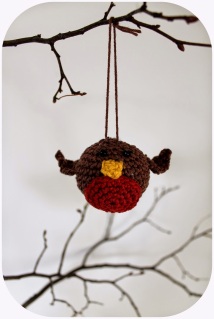 If you would like to make one yourself the pattern is as follows:
Abbreviation
Ch – chain
Dc (US sc)– double crochet (US – single crochet)
Dc2tog (US sc2tog)– double crochet two together – insert hook into stitch and draw up a loop. Insert hook into next stitch and draw up a loop. Yarn over, draw through all 3 loops on hook. (US – single crochet two together)
Ss – slip stitch
Materials
Rowan Cotton Glace or any 4ply mercerised cotton
A – Brown, Earth sh.863
B – Red, Poppy sh.741 – oddments
C – Yellow, Mineral sh.856 – oddments
3mm (UK 11) crochet hook
Toy stuffing
2 x small black beads for eyes

Finished size
Completed robin measures approximately 15cm in circumference and 8cm in height, but it really doesn’t matter if he’s a bit bigger or smaller. 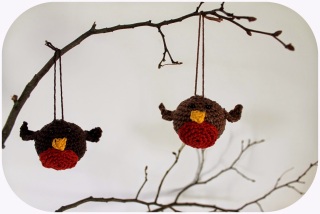